We’re delighted to have our great pal Rosie Davis as our featured performer at the Frittenden session on the 28th April.

Rosie has a distinctive and arresting way of putting over a song from whatever source. She’s also a great songwriter (the kind whose songs you can imagine other folks learning and singing) and of course an amazing dancer. All in all, she’s a class act and a great entertainer.

(Please note – this will be the last of this year’s season!)

Here’s a potted biography of Rosie we published a few years back:

Rosie Davis was born in Woolton near Liverpool, and has been singing and dancing from the age of three years. She became interested in folk music in her teens and developed an interest in Old Time Music and Bluegrass, playing and singing at home with her two older brothers.

Rosie has been instrumental in the development of freestyle Appalachian step-dancing in the UK from the early 1980s, performing and giving workshops at many high profile festivals here and in Europe. As a respected musician, as well as an entertainer, her love and understanding of traditional music underpins the way she teaches and dances.

Most recently she has been developing her interests in Southern English step dancing and European social dance, and singing for dancing.

Rosie plays and sings with string band Old Faded Glory in East Sussex as well as performing solo at folk clubs, with Dave Arthur and Pete Cooper, with Sisters Unlimited and Jig Jaw.

She has been a member of several celebrated Bluegrass bands and plays autoharp, banjo, bass and feet – not all at the same time and is in much demand as a dance caller. Rosie’s instruction book and music for dancing, Karaoke Cloggin’, is available on CD. 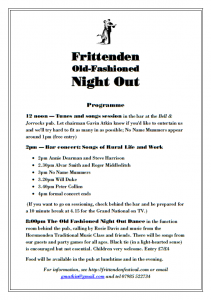 We have a programme! Click on the image to preview the programme for Saturday.

A great sing and some tunes at lunch time, a smashing concert in the afternoon, and a delightful dance in the evening… Why not join us?

Our day and evening out at the Bell & Jorrocks on the 6th April, Frittenden includes:

The bar events are free (and will be fabulous) but tickets for the dance are £7 and £4 (concs), with all funds raised going to help fund further events. Contact gmatkin@gmail.com or 07985 522734 for information.