Kent’s Kerry Fletcher is a traditional dancer of many styles, from waltzing to clogging, but at Frittenden she will be focusing on Southern English-style stepping. She’ll be teaching step dancing at the Memorial Hall during the afternoon on the Saturday (open to adult and children with parents), and performing at the lunch-time sessions at the Bell & Jorrocks and in the afternoon concert. 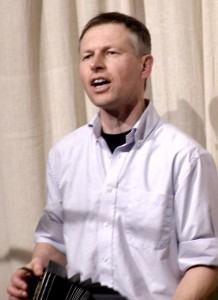