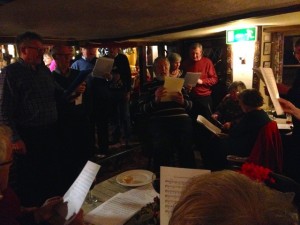 Come and learn some lost local old carols with us .

We’re working on the carols because they’re fun to learn, but also because we’re planning to sing them at two evenings of carol singing with song sheets in the pub at the West End Tavern, Marden from 8pm on the 13th and 20th December.

We’re all used to hearing the same few carols each year – but actually there are many more around the country. Most of the ones we’ll be singing come from a book of lost local carols researched and edited by George Frampton, and published by the Faversham Society.