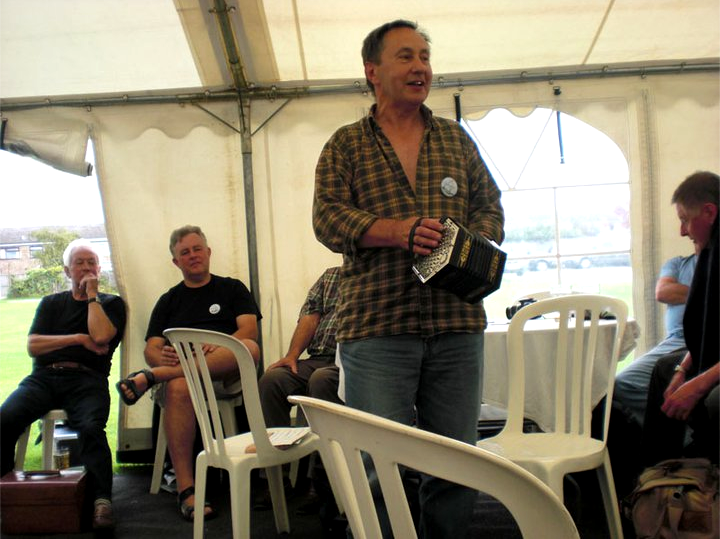 We’re delighted that entertaining Jeffries duet maestro Mike Hebbert has agreed to return to Frittenden to feature in the regular free end-of-the-month session on the 26th April – the last of the season.

The session starts at 8pm, and we’ll ask Mike to chip in three short sets  of three items, as usual. No doubt it will another night to remember, as Mike takes his little box through an astonishing range of musical forms – last time, in addition to his famous performance of the Dambusters March, I remember he also played material ranging from tango to slow Irish airs.

In the usual Frittenden way, there will also be lots of time for songs and tunes (and anything else that’s follows our usual agenda of trad, old fashioned and entertaining) from session attenders. Contact gmatkin@gmail for information.

In the meantime, here’s what Mike has to say:

‘Concertinas are uncommon enough instruments and Jeffries duets are the most uncommon type of concertina – but Gavin Atkin plays one of these oddities, and so does this evening’s guest  Michael  Hebbert.

‘Michael was born in Glasgow, grew up in Blackburn Lancs and began his performing career in Wallingford Oxon as a pub musician and dance band leader, contributing to Ashley Hutchings’s Kicking Up the Sawdust  (Harvest SHSP4073) and releasing his own LP The Rampin’ Cat (named after the pub, Free Reed FRR 009).

‘On the folk circuit he has a long-standing double act with singer Andrew Frank and his concertina classes and workshops have featured at Kilve, Witney, Swaledale, Bradfield and the English Country Music Weekend.

‘With a huge repertoire of tunes from many traditions, Michael shows the tremendous versatility of the instruments made by the Jeffries brothers. A triumph of late Victorian craftsmanship measuring only 6in across, the little squeezebox packs the essence of the music whether it’s blazing away like a fairground organ, punching a tango rhythm, or unfurling the long melody of an Irish slow air fit to break your heart.’