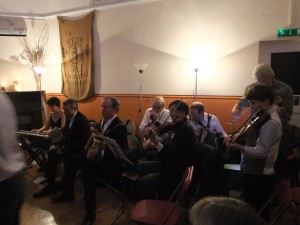 A barndance at Frittenden

The hurly-burly of the Christmas season, wonderful though it was, seems a dim memory in mid-January… But the fun goes on with:

See the website pages for the workshops and sessions for information! 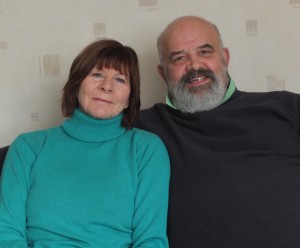 Sunday the 23rd February is the date of our next Frittenden session at the Bell & Jorrocks, when our featured visitors are Ollie and Malcolm Woods. (The sharp-eyed may remember Malcolm played with the band as a visiting friend at the Harvest Hop back in November.)

Ollie and Malcolm Woods  met 38 years ago at Islington Folk Club when it was still at The Florence just off Upper Street – Seamus Ennis was the guest – and have both been actively involved in traditional music, song, dance and various calendar customs ever since.

Ollie sings and plays bones and Malcolm plays melodeon and sings. Their repertoire is firmly rooted in English music, with a few diversions into the Music Hall, the Victorian parlour and other sources along the way.

Based in Southend-on-Sea, they are nevertheless regular participants in The Hunting Of The Earl of Rone in Combe Martin, Devon and, more recently, The Traditional Sailors’ Hobby Horse in Minehead. They are also annual pilgrims to South Yorkshire during the carolling season and follow the Good Easter Molly Gang on Plough Monday – Ollie and Malcolm danced with Cockleshell Clog and Angel Morris respectively for many years.

Both Ollie and Malcolm appear on Malcolm’s CD Amongst Friends produced by Wren Music of Okehampton (Wren CD018) in 2012. If you stand still long enough he will likely try and sell you a copy…